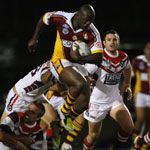 After being dropped from first grade several times this season, Dragons’ half Jamie Soward produced one of the best performances of his career in dismantling the Melbourne Storm over the weekend.

Soward engineered the Dragons 36-12 victory over the reigning NRL premiers who were missing nine players on State of Origin duty.

The former Rooster had a hand in each of the Dragons’ tries and finished with a personal tally of 16 points.

The highlight of the performance was a brilliant 71st-minute try that saw Soward leap for a Rangi Chase chip into the Storm in-goal and somehow manage to ground the ball with his outstretched fingertips.

While Soward has been in and out of first grade so far this season, incoming Dragons coach Wayne Bennett has seen enough promise in the young player to retain him for a further two seasons.

His return to form has also coincided with a positional shift from halfback to five eighth.

“I’m loving it,” said Soward after the match, speaking about his new position.

“I’m a bit wider and don’t have to run the team around as much … probably at the moment I see myself more as a six.”

Making his return to football on the same night was Dragons recent signing Wendell Sailor who had his first hit out with the Shellharbour Marlins in the Jim Beam Cup.

A crowd of more than 3000 defied icy conditions just to see the charismatic winger play his first rugby league game in seven years and his first football game of any kind after serving a two year drugs suspension.

Drawing unprecedented media attention for a Jim Beam Cup match, Wendell didn’t disappoint, scoring two tries including the match winner late in the second half and was mobbed by fans at the final siren.