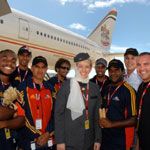 Six indigenous students from some of the remotest parts of Australia are about to embark on a trip of a lifetime. The students, from Djarragun College at Gordonvale just south of Cairns, have been invited to visit the United
Arab Emirates.

The visit has been arranged by Dare to Lead, a project backed by the Federal Government, which works with school principals throughout Australia to improve educational opportunities for Aboriginal and Torres Strait
Island students.

When he heard about the Dare to Lead project, the U.A.E. Ambassador to Australia, Dr. Saeed Mohammed Al-Shamsi, decided to invite the students on a cultural exchange to his country. They will be accompanied by a teacher, and officials from Dare to Lead, who will use the opportunity to promote the project, which works in partnership with corporate sponsors and charities.

“We believe there will be a huge interest in the U.A.E in the challenges facing indigenous students in Australia, and we hope to interest corporate sponsors in contributing to the Dare to Lead project”, said Andrea Harms, the National Coordinator of Dare to Lead.

The students are all accomplished dancers and will perform dances from the Torres Strait dressed in traditional island costumes, and well as dances from Cape York.

“This will be an eye-opener for everyone involved”, said Andrea Harms. “The students have very little experience of the world beyond the Torres Strait and North Queensland, and people in the U.A.E know next to nothing about indigenous life and culture in Australia”.

“Our goal is for Indigenous young people ultimately to enjoy the same standard of living as other Australians – for them to be as healthy, as long-living and as able to participate in the social and economic life of the country,” said Andrea Harms.

“Schools’ that have been working with Dare to Lead since 2003 have seen 15% improvement in students’ reading and writing and more than 10% more Indigenous Australians completing their final year of education.”

The students involved are:

They depart Cairns on Friday 21st March, and from Brisbane will fly with Etihad Airways to the UAE the next
day. They return to Cairns (via Brisbane) on Sunday 30th March.

Seeing the potential in developing further cultural links between Australia and the UAE Abu Dhabi based Etihad Airways, the national airline of the United Arab Emirates, jumped at the chance to come on board as the official airline of the tour, by sponsoring the students travel.

“This is a great initiative which will strengthen the relationships between indigenous Australians and the UAE.
We are proud to sponsor the students and support the Dare to Lead program,” said Etihad Airways’ Manager Australia and New Zealand, Cramer Ball.

Dare to Lead is led by the Australian Principals Association Professional Development Council (APAPDC).More than 5,000 government and private schools are members -almost 50% of all schools in Australia.