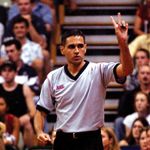 Queensland referee Scott was selected by FIBA, the international governing body for basketball, to represent Australia at the 2004 Olympic Games.

Scott referees in Australia’s National Basketball League (NBL). Although only in his early thirties, Scott has been refereeing competitive basketball for more than 15 years, with 12 of them in the NBL. He is the first Indigenous person to have refereed in the NBL.

It’s not easy being a referee, the lonesome figure on centre court who absorbs all our abuse, frustration and anger without so much as a change in expression. Sure, we see them as the enemy at times, especially when our team is losing, but few people stop to appreciate just what a brave job the men and women with the whistle do.

One of the top referees in Australia’s premier basketball league, the NBL, is Scott Butler. Scott, 32, has been refereeing competitive basketball for 15 years, and although he is only young, he is considered one of the senior referees in the league. He is also the first Indigenous person to have refereed for the NBL, where he has been for the past 11 years.

Originally from Rockhampton, Scott began his basketball career as a player before moving through the ranks as a referee in divisional championship games. He progressed to the nationwide league known as the ABA and then finally into the NBL.

” As a junior player, we were required to referee junior games at my club,” says Scott. “There was also a refereeing development officer who was training us and he saw some potential in me and encouraged me to attend some junior championships. He suggested that there might be a good career for me in refereeing.”

While Scott displayed some of the natural qualities of a good referee from a young age, pinning down exactly what makes a good ref is a tough question.

“I suppose that there are different internal and external factors that go into being a good referee,” says Scott. “One of the internal things is that you need to have belief in yourself, but also be honest at the same time. The paradigm with refereeing is that you always want to referee the perfect game, but you know you can’t, it’s impossible, and that is something that you constantly have to be aware of.”

To reach the elite level of refereeing that Scott has takes a great amount of willpower and sacrifice. It also takes plenty of support to get through the stress and pressure of being a big-game basketball ref.

“It’s important to be persistent and to have a good support base, whether that comes from other referees on the court or from your family base,” says Scott. “Being an official can be a lonely job, so support wherever that may come from is really helpful.”

Through refereeing, Scott has enjoyed an amazing career. In 1997, he travelled to Brazil for the women’s club championships and in 1998 made his way to Germany with the junior Australian team. In 2001, he made a trip to Spain with the junior Australian team for the Junior World Championships, and in 2002 he was invited to Korea for the Asian Games. Scott has also refereed at the 2001 Brisbane Goodwill Games.

“One of my most memorable games was the Magic Johnson all-star game in Brisbane,” says Scott.

Scott says he rarely mixes with any of the high-profile stars of the sport that he has crossed paths with during games.

“I don’t really mix with the players,” he says. “I’m there to do a job and that is my only focus. When you have been refereeing for this long, the level of professionalism is at a point where every game is exactly the same irrespective of who’s playing in it.”

That’s why Scott always puts aside time during the week to referee local junior games near his home in Brisbane.

“It’s important to stay involved in all levels of the sport, and referring the local games helps me to stay grounded,” says Scott.

Scott has refereed the past six NBL finals series, an achievement that speaks volumes for his ability. In games like these, with so much on the line, referees can feel as much pressure as players.

“Irrespective of what kind of game it is, my goal is to make sure everyone walks away from the game thinking about the game and not me,” says Scott.

In a career that has included up to 30 finals games and an average of 50 NBL regular games a season, perhaps Scott’s most impressive achievement is his success in paving the way for other Indigenous people to follow his path. And although it is a great achievement to be the first and only high-profile Indigenous basketball referee in the country, Scott prefers to stay focused upon the game.

“Out of all the accolades I have received over the years, my most prized award was being named the Indigenous referee of the year at the Indigenous sports awards held in Tasmania three or four years ago,” says Scott. “It’s nice to be honoured among your own people.”