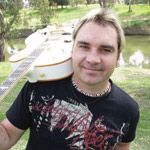 Another Indigenous performer is on the road to Tamworth.

A second Aboriginal heat winner will be heading to the Tamworth Country Music Festival this month to perform in the Telstra Road to Tamworth competition.

Nigel Beetson won the Lithgow heat of the competition in November of last year, performing two of his own compilations, The Way You Made Me Feel and Me and My Old Man.

The Telstra Road to Tamworth competition is an opportunity for young performers to make a name for themselves and launch their singing career. Previous winners include country music stars Todd Williams and Jessica Mauboy. Indigenous singer Catherine Sumner is also a finalist in this year’s competition.

The winner receives a prize pack, including an airfare to Nashville in the USA where they will record a single through Sony BMG.

Nigel, who grew up in Brewarrina but now lives in Dubbo, considers himself more of a songwriter than a performer, but is excited about the opportunities that the competition can offer him.

“I’ve been performing for a long time,” he says. “But the Road to Tamworth competition is offering the ideal start to a recording career and that is the real goal for me at the moment.”