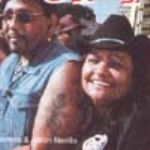 For more than a decade now Marlene Cummins has been playing, singing and writing the blues. Most of you are probably familiar with her legendary song “Pension Day Blues” ” as featured on the compilation Yabun: Song with a Beat ” not to mention her numerous performances at Survival over the past few years.

Born in Queensland, Marlene grew up surrounded by music. Her father, well-known musician Darcy Cummins, would regularly drag his kids along to gigs and shindigs, hoping to instil in them a love for all types of music. The Cummins family also spent a lot of time around the infamous fringe camp known as Boomerang Alley, where people from all over would gather to sing songs, dance and generally have a great time.

When she was 10 Marlene and her family relocated to Brisbane, where her father soon became active in organising the Opal dances. Marlene and her siblings formed The Opal Younger Set, learning traditional dances and performing them for Elders and community members.

Apart from music, Marlene’s family was also very passionate about politics. At the age of 16 Marlene made her way to Canberra to get involved in the Aboriginal Tent Embassy and from there she went on to become a member of the Australian Black Panther Party in Sydney.

While Marlene had always dreamt of playing saxophone and becoming a blues performer, she actually spent many years involved in Aboriginal theatre. But after seeing the classic film Wrong Side of the Road, featuring tenor saxophonist Veronica Rankin from No Fixed Address, Marlene finally said to herself, “I’m gonna get me a sax and start blowing.”

After having completed a course at the University of Adelaide’s Centre for Aboriginal Studies in Music, Marlene knew it was time to get her own sax (she’d borrowed one for studying). Purchasing such an expensive instrument was always going to be a major hurdle, but she managed it with some help from the late Eddie Mabo.

“He was working with the Department of Aboriginal Affairs in Townsville at the time, and I’d moved back there and was taking lessons from Taffy Jones twice a week. One day he took me to a music shop and convinced the owners to let me pay a sax off. It was such an incredible thing for him to do.”

Now with her own sax to have and to hold, Marlene started learning from some of her favourites including Etta James, Big Mamma Thornton and Mahalia Jackson. As her confidence grew she became more and more determined to go to America and study at “˜the source’. In 1994 her dreams were realised when she was offered a three-month course at Berklee College of Music in Boston.

“It was the most fantastic experience,” she recalls. “The amount that I learned was phenomenal and it made me aware that there’s cordial blues and then there’s the real juice!”

Realising that she had been “picked by the blues”, Marlene was lucky enough to work with her idol Syvanna Doolan upon her return home. To this day she nominates Syvanna as being one of her biggest influences in helping her to soak up all the intricacies of the genre.

“Blues is not just about singing sad songs, it’s about elevating people’s spirits. You have to go to a place within yourself to do that ” and that can take years.”

Marlene has most definitely reached that place after battling her own demons. Her music has been pivotal in helping her to overcome alcoholism and get her life back on track after a period of disarray. Add to this the close relationship she has with her son Leroy, a deadly musician in his own right, and numerous pilgrimages to the States to hone her skills, and she’s well and truly in a better space than ever before.

“Leroy has been the biggest contributing factor in my rehabilitation and my drive to achieve,” she says. “I’m in a really good place now ” physically and spiritually. After attending the Monterey Blues Festival in 2000 and meeting one of my true heroes, Trudy Lynn, I realised that I could do it.”

She’s doing it alright. After blowing audiences away at Survival last month, Marlene is finishing off her diploma in teaching at Eora College and working on material for an album, including a collaboration with Christine Anu.

They might call them the blues, but for Marlene Cummins they’re bringing her plenty of sunshine!