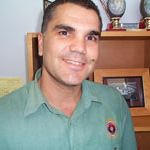 The people of Cherbourg in Queensland have witnessed a remarkable transformation at their primary school over the past five years.
Cherbourg State School principal Chris Sarra doesn’t like to say it’s all down to him – he credits much of the radical change to his excellent teachers and to the students themselves – but when he arrived in August 1998, he found a school in need of help.

He found not only a low level of achievement among students, but plenty of bad behaviour. Students wandered in and out of classrooms as they pleased – and even into the principal’s office! They went home whenever they felt like it, and left rubbish lying around the school grounds. There was no school uniform, low attendance, and some parents in the community had started sending their children to school in nearby Murgon.

Chris decided then and there that he was going to change things from the top down.
He told teachers that if they didn’t believe the students could perform at a level comparable to children at other schools, they should leave. Some did.
He also went out into the community and, over many cups of tea with parents and grandparents, talked to them about the students’ behaviour and how everyone should expect more from them. An Elders committee was established to advise the school on community issues.

Then he set about instilling a sense of pride in students – pride in themselves, pride in their school and pride in their Aboriginality.
” I encourage them to be proud that they’re part of the oldest race in the world,” Chris says. “I want them to go to high school with fire in their belly, not in the sense of being angry at society, but in not letting anybody put them down.
” A lot of our kids fall by the wayside when they get to high school. I want them to be solid at the core and to recognise things that society doesn’t want them to know about, like racism.”
Chris also came up with a school motto – “Strong and Smart” – that would consolidate all of these ideas. “But I say to them that it’s got to be more than just words coming out of your mouth,” he says. “You can’t stay home if you’re feeling slack because that’s not being strong and smart.”

” Then I decided to up the bar a bit – if you keep expecting more, then the kids will give you more.

” I made it that if kids had less than five days’ absence in a term they could go to McDonald’s. In Term 1 last year, only 10 kids didn’t get to go.
” And in the first week of November, I said that if the kids in Years 5, 6 and 7 had less than 10 days’ absence for the year, they could get on a plane to Melbourne and go and check the place out – 18 kids went to Melbourne. The younger kids could get a trip to Sea World.”
Although Chris is studying for a PhD in psychology, he says that inspiring his students to achieve things for themselves “isn’t rocket science”.
” We have kids who are hungry to learn stuff,” he says. “One girl got to Grade 5 before she read her first book. Now she gets into trouble for pushing kids out of the way to get to the books.

” I’m pleased with the way things have changed but there is plenty of room to improve. I’ll be happy when we’re outgunning white schools … I’m determined we’ll be in front.”