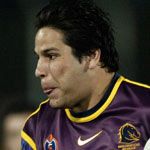 Brisbane Broncos’ Carl Webb is a big man with a reputation to match. Weighing in at 109kg, the robust utility forward loves to train hard at the gym and is fast improving his pace and aerobic fitness.

Having already played four games for Queensland in the State of Origin, it shouldn’t be long before this 21-year-old Waka Waka fulla is wearing the green and gold of Australia.

“˜Charlie’, as he is known to his team-mates, grew up in Dalby, a small town northwest of Toowoomba and went to school at Kelvin Grove State High School.

Spotted by Broncos’ recruitment officer Phil Connell, Carl moved to Brisbane after high school as a 17 year old. He started off with the Broncos’ first division side, Toowoomba Clydesdales, in the Queensland Cup, but was promoted to first grade towards the end of 2000.

A career highlight occurred when he was selected to the Maroons for the 2001 State of Origin series. Not only that, but the lad from Dalby scored a phenomenal try in his debut game.

“Being picked for the Origin series was a dream come true,” he says. “When the actual team came together I felt as though I was living a dream, because of course it is something I’ve dreamed about since I was a kid.”

As a young fulla playing footy, Carl looked up to players like Wally Lewis and Allan Langer.

“Now having the opportunity to play alongside Alfie Langer is just great,” he says. “He has so much experience and he teaches you a lot. Playing with the likes of Darren Lockyer, Shane Webcke and Gorden Tallis is also good because they’re the sort of players you look to if you need to lift your game.”

“When playing against Joe you always have to be on your game, because if you’re not then he lets you know about it!” he says with a chuckle.

Carl has just re-signed to the Broncos for a further two years, but hopes to stay even longer because the club “has a real family atmosphere to it”. And once he’s done his dash on the field, he would like to become a football development officer.

“I occasionally do it now and it’s really enjoyable to get out and about, see the kids and teach them about league. When I retire that’s something I’d definitely like to pursue.”

Right now, though, Carl and the lads are fine-tuning for the finals. How hopeful are they of a premiership win?

“We’re pretty confident, but at the same time we don’t want to be overconfident. We just have to take every game as it comes. The Warriors are playing really well at the moment and I take my hat off to them. They gave us a bit of a touch-up a couple of weeks back and they’re going to be hard to beat!”

Then again, a 109kg forward who’s been breaking lifting records at the gym this year won’t be a pushover either.