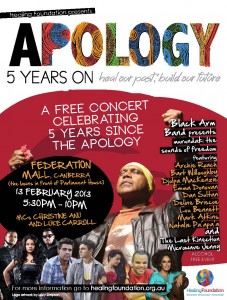 A concert featuring the Black Arm Band will celebrate the fifth anniversary of the historic Apology to the Stolen Generations on 13 February on the lawns of Federation Mall, Parliament House.

The free concert features an amazing line up of award-winning Aboriginal and Torres Strait Islander musicians, including Microwave Jenny and hip hop sensations The Last Kinection, as well as the Black Arm Band, many of whom are Stolen Generations.

The concert celebrates the then Prime Minister Kevin Rudd’s historic Apology to the Stolen Generations on 13 February 2008. It was a significant, sacred and moving event that acknowledged the wide reaching impact of past Government policies and practices. It was also a public admission of the Government’s responsibility for the trauma, loss and separation from family, community, culture and land that the Stolen Generations have experienced.

The Apology – Five Years On – Heal our Past, Build our Future will run from 5.30pm to 10pm and is being hosted by the Healing Foundation, which was established on the first anniversary of the Apology to support culturally strong, locally run Aboriginal and Torres Strait Islander healing programs around Australia to address the legacy of past policies and practices. The Healing Foundation also funds education and research on Aboriginal and Torres Strait Islander healing.

Audio-visual postcards from locations around Australia will be screened to show how other communities are celebrating the fifth anniversary of the Apology as well as describing how they have been embarking on their own healing journeys.

CEO of the Healing Foundation Richard Weston says the fifth anniversary of the Apology is a time for Australians to come together and pay tribute to the Stolen Generations.

“It is wonderful that communities throughout Australia are celebrating the 5th anniversary of the Apology. We are delighted to host a major national event highlighting the community successes since the Apology,” Richard says.

A highlight of the evening will be a performance of Murundak, songs of struggle, resistance and freedom, by the legendary Black Arm Band. This will be an audio-visual feast with solo performances from an ensemble of amazing Aboriginal and Torres Strait Islander musicians.

A full line-up of the artists performing will be announced on 28 January.

The Apology – Five Years On – Heal Our Past, Build our Future will be held on Wednesday, 13 February, 2013 on the lawns of Parliament House from 5.30pm to 10pm. There will also be a space for Elders to relax and watch the main stage entertainment.