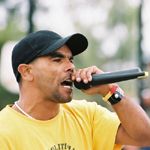 On its fourth visit to the South Australian town of Murray Bridge, the Vibe 3on3™ once again attracted a large number of the community’s young Indigenous people for an eventful two days of basketball and hip hop activity.

Held over the weekend of November 26 and 27 at Murray Bridge High School, the Vibe 3on3™ featured non stop 3on3 basketball matches throughout the day as well as break dancing and hip hop workshops for both boys and girls.

Hosted by former Harlem Globetrotter Dwayne Cross, the event brings with it a crew of high-energy resident B Boys, B Girls, MCs, DJs and sporting figures.

Over the two days, up to 57 teams registered to compete, and many more people made their way down to the event just to watch the action, enjoy the music and soak up the atmosphere. Teams travelled from as far afield as Renmark, Berry and Meningie to join in the event.

The 3on3 was opened with a Welcome to Country by Eileen McHughes of the Ngarrindjeri people. The welcome was followed by a performance by the Talkinjeri dance group and speeches by Peter Lewis MP, the Member for Hammond, and Allan Arbon, Mayor of Murray Bridge

Also playing a huge role in the event were Lyn Watkins and Clyde Rigney, whose cooperation and commitment in pre event preparations helped make the weekend the success that it was.

“Once again the local and surrounding communities supported and committed themselves to the event with passion,” says Claude Williams, former Sydney Kings coach and Vibe 3on3™ coordinator. “It was great to see parents, spectators and participants getting into the spirit of the event and enjoying themselves. There was some awesome talent on display throughout the weekend for all to see. Murray Bridge is definitely a major event on the 3on3 calendar.”