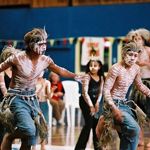 The Vibe 3on3 returned to regional Victorian town of Shepparton for the second time recently for another huge dose of basketball and deadly hip hop vibes.

Held at the Shepparton Sports Stadium on the 8th and 9th of October, the Vibe 3on3 once again showcased just some of the exceptional talent that within Shepparton’s large Indigenous community. The event got started early on the Saturday morning after a welcome to country speech by Neva Atkinson of the Yorta Yorta people, followed by a performance by the Wolithica Dance Group.

Indigenous Hip hop artist, Brothablak was on hand to M.C the event and he treated the crowd to a performance of several tracks off of his up and coming debut album. It was then time for the basketball and hip hop action to begin as 3on3 basketball tipped off on all courts, while some teams attended the break-dancing workshop run by the always popular B-Boy 2 Ezy as well as Beat-Boxing workshops hosted by Brothablak.

As well as the sporting and hip hop activities that run throughout the weekend, young people who attended the event also passed through the Vibe 3on3 Health Expo, where they received health information and had their blood sugar levels checked.

“Shepparton remains one of the nicest towns we have visited on the tour and the kids were among the most enthusiastic and competitive I have seen. They displayed good basketball skills and some funky moves in the dance competition, their behaviour was exceptional and they were a credit to their parents and the community,” says Event coordinator, Claude Williams.

Vibe would like to give a special thanks to Carol Smith from the Rumbalara Football and Netball Club for her support in lead up to event.