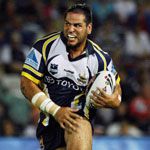 Australian selectors have chosen five Indigenous players in the 17 man squad to take on New Zealand in next month’s Centenary Test.

After much speculation, Jonathan Thurston has held off a strong challenge from Scott Prince to retain his number seven jersey.

Enjoying a strong start to the season, Greg Bird has been repaid for his form in the green and gold late last year and will make his second appearance for Australia. He will however shift from pivot to lock to make way for Darren Lockyer who returns from injury.

Maintaining his reputation as the games best centre, Justin Hodges returns in the number four following a courageous display against South Sydney in which he battled flu and a shoulder injury to help lead Brisbane to victory.

Hodges will be joined by Greg Inglis who moves in from the wing to create an all Indigenous centres pairing.

With a surprising ten changes overall from the team which so comprehensively defeated New Zealand in October last year, one of the most notable new inclusions is that of Cowboys front rower Carl Webb, who along with Billy Slater will make his Australian debut.

Webb has been on the cusp of Australian selection for some time with only suspension and injury keeping him out of the side. He will start the game from the bench and provide Australia with plenty of aggression.

The Centenary Test will be played at the Sydney Cricket Ground on May 9.