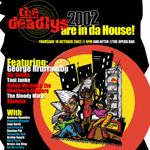 It was a night of glam frocks, black rock and turning back the clock at the 8th National Indigenous Music, Sport, Entertainment & Community Awards (“˜the Deadlys’), held this evening at the Sydney Opera House.

The awards ceremony and concert got underway with legendary rocker Vic Simms and the Solid Vibe Dancers (from NAISDA Dance College) letting loose with a show-stopping rendition of AC/DC’s “School Days”. And that was just the beginning!

Interspersed between the 20 awards bestowed on a variety of musicians, bands, sportspeople, actors, entertainers and community achievers, were performances by Toni Janke, Shakaya and George Rrurrambu (ex-Warumpi Band).

The most unlikely number of the evening came in the form of a “˜turn-back-the-clock’ tribute to the late Elvis Presley, featuring Leah Purcell, Emma Donovan (ex-Stiff Gins), Ursula Yovich and host Michael Tuahine.

Once again the after-party, held this year at the Opera Bar, was the place to be after the Deadlys. Opening with the sophisticated sounds of jazz vocalist Liz Cavanagh and her band, the post-event bash was a chance for autograph hunters to fill pages, and for winners to show off their “˜Deadly’ rings (trophies are so passÃ©), designed by Jules Collins.

For fans of vocal group Tiddas there was a rare treat, with Lou Bennett and Amy Saunders performing in their new line-up, the Bloody Marys. Stepping away from their traditional sound, the trio brought the after-party to a climax with their version of Marvin Gaye’s classic hit, “What’s Going On”. Too Deadly!

Then it was time to get down to more urban sounds as South West Syndicate, MC Wire and host Brothablack commandeered a late-night helping of R&B and hip-hop treats. And the dance floor was creaking! DJs Nick Toth and Goldfinger finished off the proceedings.

Single Release Of The Year
Stop Calling Me ” Shakaya

Band Of The Year
Shakaya

Album Release Of The Year
Sensual Being ” Archie Roach