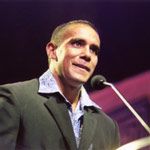 One of league’s rising stars scores a win at his very first Deadlys.

North Queensland Cowboys’ explosive winger Brenton Bowen had a top night at this year’s Deadlys, taking out the award for Most Promising New Talent in Sport.

For this powerful player, winning the award was the perfect icing on an already deadly cake. It was Brenton’s first time at the Deadlys, and also his first time inside the iconic Sydney Opera House, both reasons to make his trip to Sydney a very exciting one.

He and his cousin Matt Bowen were excused from team training to attend the event, but had to give the after party a miss as the two had to head straight back to Queensland to prepare for the Cowboys’ grand final qualifying match against Parramatta” a game that saw North Queensland annihilate the Eels 29-0.

Brenton was certainly up against some stiff competition, sharing a nomination with AFL sensations Andrew Lovett and Lance Franklin, and Melbourne Storm’s Greg Inglis.

“I was really thrilled just to be nominated,” he said on the night. “I watch the awards every year on TV, so it’s great to actually get to be here.”