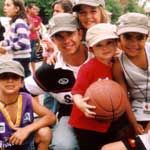 After being scouted by rugby league legend Arthur Beatson,Joe Williams moved to Sydney from his hometown of Wagga Wagga at 16 and joined the Roosters Under 20’s squad.

While he enjoyed success at the Roosters in the Jersey Flegg and Premier League grades, an opportunity in first grade was not forthcoming, and so at the end of the 2003 season, Joey opted for a fresh start and singed with the South Sydney Rabbitohs.

Joey made his debut for the club in round 12 of the 2004 season. A talented play maker and handy goal kicker, in 2007 Joey was instrumental in leading the Rabbitohs to their first finals series appearance in 18 years and also stared in the North Sydney Bears charge to the Premier League Grand Final.

After four years at the Rabbitohs, Joe was linked to a move to France before eventually joining the Panthers to begin the 2008 season. He has since signed with the Bulldogs.

Joe is one of a range of Indigenous role models who attend the 3on3, passing on encouragement and mentorship to the communities young people.