The Deadlys is one of the highest profile national events on the Indigenous calendar – in fact, the Australian calendar. It’s grown from an event at a small inner-city art gallery that held 100 people, to an annual gala occasion hosted by the Sydney Opera House and televised across two Australian television networks.

The event is strongly supported by Aboriginal and Torres Strait Islander people across Australia. Independent research tells us that 8 in 10 Indigenous adults (83%) have heard of the Deadlys and, of those, around 7 in 10 (71%) have watched the Deadlys on television. 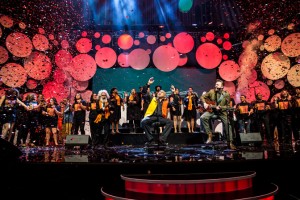 To do justice to the Deadly Awards, Vibe Australia strengthened the nomination and voting systems in 2011, which was followed by an improved nomination and voting system in 2012 and 2013. Award categories still retain a popular vote, but in categories where expertise is required, a panel of judges called the Deadly Executive Academy, provide valued input.

Showcasing achievement at all levels

The Deadlys showcases Aboriginal and Torres Strait Islander achievement and contribution at the individual, organisational and community levels not only to the Indigenous community, but also to wider Australia.

The Australia-wide media interest in the Deadlys, both Indigenous and non-Indigenous, is a key indicator of the strong support for the Deadlys, and the very important position it enjoys on the national calendar.

Indigenous media are strongly supportive of the Deadlys from national newspapers through to the Indigenous community-broadcasting network and, of course, the National Indigenous Television (NITV), covering the event from the launch of the event through to the awards night. Mainstream media coverage through Australian Associated Press and national and state metropolitan media is indicative of the substantial profile the event has achieved with non-Indigenous Australians.

The Deadlys not only contributes to Closing the Gap objectives through its objectives and the outcomes it gains, but also promotes personal achievement and responsibility as an attainable reality that all Aboriginal and Torres Strait Islanders can achieve, and have achieved.

Nominees and winners in each award category are actively contributing to Closing the Gap and there are opportunities for the Australian Government to acknowledge this contribution, showcase it to wider Australia and deliver whole of government messages through a credible and effective medium. The Deadlys® does much to raise the self-esteem of individuals in the community, as well as the community as a whole and instils much hope for the future.