The guts of the program is a dance workout, with three routines per episode. There are 3 dancers or performers led by our host/instructor and a co-host/choreographer. The routine is a combination of different dance styles designed and developed by the co-host. Exercises and dance moves are repeated in each of the three tracks to help the audience learn the combinations. Scattered between these dance routines, and linked by our studio hosts, are pre-recorded segments. 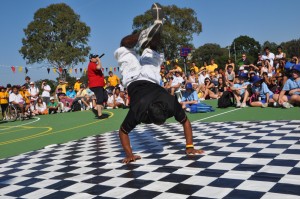 From one episode to the next, different moves are shown and created from the moves collected in different communities – a Move it Mob Style ‘movement vocabulary’. Over the Move It Mob Style journey, we learn moves like ‘accelerate’, ‘fishing for barra’ and ‘reach for the stars’ to name a few.

Now in its fourth season, it has been nominated for an ASTRA Award and two ATOM Awards, and continues to be well received by fans across the country.